How much do voice actors make with voiceover work?

How much do voice actors make? Well, there’s no easy answer to how much you will potentially earn. But, in this article, we will attempt to find out the salary range for voiceover actors, based on different scenarios and factors. No one blindly starts a career without questioning how much money they will earn. So, it’s important to understand how to make successful earnings with voiceover work.

The actual number of how much money a voiceover actor earns can range from $20 to millions of dollars. Often, there are many critical factors that will determine your salary in this industry.

What do you need to become a voiceover actor?

Voice actors record a script intended for TV, Film, radio, commercials, marketing videos, video games etc. It may sound easier than you would think. However, there are skills you must possess to make it in the industry.

How much do voice actors make hourly?

The national hourly average rate for voice actors in the United States is $37 per hour. However, that’s not to say you won’t earn more or less. This statistic can range depending on location, industry, time of voiceover, and whether it’s union or non-union etc. But we will go over that later in this article. 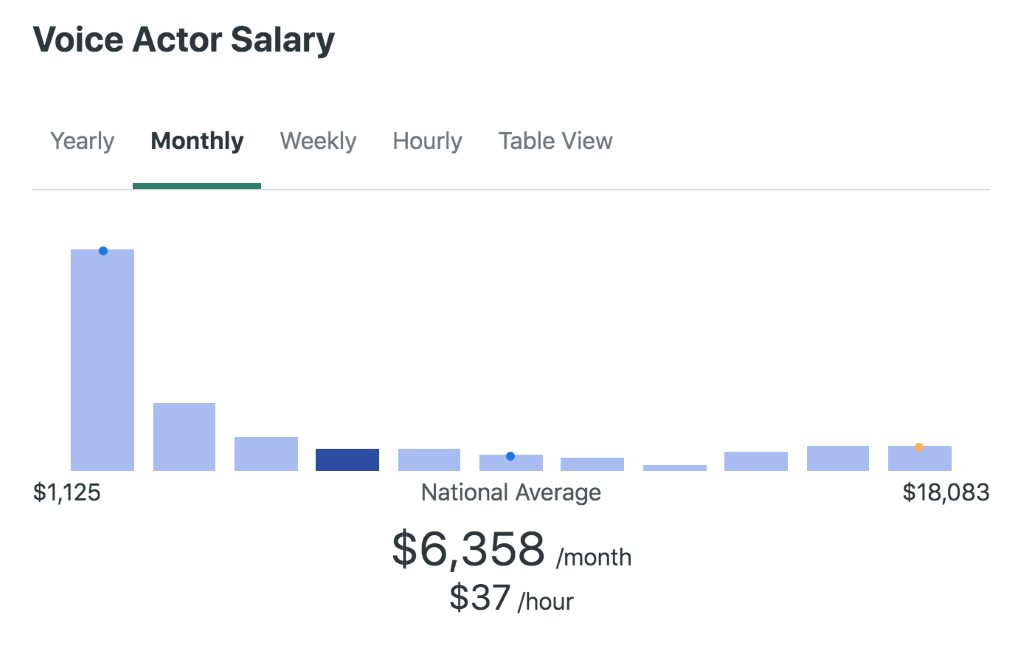 There are always opportunities in the voice talent industry. However, it’s not always as easy as many perceive. Similarly to on-screen acting, voiceovers and dubbing work is extremely competitive. So, you could end up getting lucky and earning millions. Or, you could earn less. However, don’t be discouraged, as there are many different types of voice acting, for a range of different industries.

There are many factors that determine a person’s salary for voiceover work. Often, talent is able to change the amount they earn overtime, based on experience. However, there are many more factors that impact this change.  So, what can change the success of your voice acting career?

A union voiceover will pay more than non-union work. If you can join a union or a guild, such as SAG-AFTRA, which is based in the USA, you are protected by certain rules in regards to your wage and working hours.

The Screen Actors Guild ‐ American Federation of Television and Radio Artists (SAG – AFTRA), states that speaking roles have a minimum payment of $782 for a day of work and $2,713 for five days of work when working with a recording artist who is a union actor.

Level of talent and experience

Most likely, this will come with time. If you’re just getting started or have only achieved a couple of gigs so far, don’t become disheartened. In fact, keep pushing forward.

You wouldn’t graduate university with a degree in Fashion Design and be made the creative director of a renowned fashion house like Gucci immediately after. Similar to the voiceover industry, it takes hard work and patience to get to a high-earning level.  But, if you do end up achieving such a goal, you could be the next Nancy Cartwright, who voices several characters on The Simpsons. On average, she makes about $400,000 per episode.

Note: Although it may be tempting in the beginning, don’t sell out and exclusively do free work that devalues your worth as a voice talent. Keep pushing forward with your talent and work ethic, and you will be rewarded. However, if you are looking to boost your resume with work, doing a couple of gigs at a reduced rate is a great way to gain experience.

There are many perks when going through a talent manager, agency or recording studio.  Firstly, you’ll likely get more paying work and auditions than a freelancer website. However, it is important to build a reel of all of your recordings previously to applying, showcasing your versatility and talent, to be considered or represented.

Some voiceover recording studios have their own roster of talent. So, when a client is looking, there will be opportunities where your reel is given to clients to consider for hire. SPG Studios has a roster of recording talents. You can apply here under the “Freelance Opportunities” section. Being represented, or being part of a talent roster is a great way to get gigs without having to hustle for them.

Your ability to market yourself

Self-promotion and marketing your talent will get you much more exposure, leading to more jobs. As well as signing up on freelancer websites, there are many avenues to explore. It’s important to highlight your niche talent and abilities.

Note: There are many platforms and agencies. In fact, you don’t have to limit yourself to one platform. However, do check agencies policies on working with different companies etc.

The number of auditions you have submitted

Although talking about numbers games isn’t exciting, there is a key point to be taken.  Unfortunately, this business requires hustle when starting out. So, applying to more jobs and submitting more auditions and demos will increase your likelihood of more work. It may seem tedious at first, and make you a bit disheartened to get rejections, but that is part of the job. So, keep going and keep your head up.  The more submissions, the more likely it is to get a gig.

Your own equipment or renting a voiceover recording studio?

Now, if you’re just starting out, and have no equipment, it’s probably time to invest. Or, you have the option of renting voiceover recording studio space.  And, yes it can get a bit pricey.  Often, professional recording booths are going to give you better quality. So, if you want to invest in a high-quality reel, it’s a great option.

However, if you are part of a freelancer site, the whole voiceover is on you. So, your options are to purchase the recording equipment or add the voiceover studio fee to your budget.

Note: Make sure to weigh out the best option for you and your budget.  Make a price comparison spreadsheet to see the difference. What are the pros and cons for you, with both options?

How much do voice actors get paid- statistics?

The following numbers and stats may vary based on your location – state, if in the USA, and by country. However, I have added these numbers from various online sources to show you the differences in voiceover salaries in 2021. (Please note that these are based on estimates and averages).

As I previously mentioned, top talent will earn way above this salary, easily making a six-figure annual salary. Of course, this comes down to experience and hard work.

How to set your price for voice acting work

Often, the price of a voiceover can be calculated by the number of words recorded. However, it can also be based on the amount of time recorded. As there’s no set price for recordings, many voiceover talents calculate their price based on different formulas.

So, if you charge hourly, you can determine your rates this way.

Most importantly, no matter how many calculations you’ve done, setting a minimum price that is non-negotiable is key. As a result, it gives you and your clients a great starting point, and in no way demeans your value and talent.

It also eliminates the possibility of returning clients trying to get a low paid voiceover once you’ve gained more experience (because you didn’t set a min fee). As well as leading to clients recommending your services at a price that’s too low, causing disappointment on both ends.

Note: Charge for your services in a way that you think is fair. Perhaps you set a minimum of $50 -$100 per job. If you’re approached by a client trying to pay you less for a small project, simply explain that your professional services fees are non-negotiable. It also helps to have a pre-made rate card or sheet that can be easily sent to potential clients. Think about it this way: You wouldn’t go to a restaurant and argue to get the cost of the meal lower. The price is the price, and it applies to your voiceover work as well.

How much do voice actors make with voiceover work? – Final thoughts

So, to answer ‘How much do voice actors make with voiceover work?’. It depends on your personal journey, your hustle, talent and luck.

No matter where you are in your voice acting career, make sure you price your services in a way that’s fair to you, and your clients.  There is a lot of money to be made from this industry, and if you’re looking for a piece of the pie, give it your best shot. If you’re looking to earn the big bucks overnight, unfortunately, you may have to accept the fact that it might take more time than you expected. However, don’t give up!